People who used this inventon

The 3-D Hypno-Ring, also called simply a "Hypno-Ring" is a ring-shaped device manufactured by the Li'l Wiseguy Novelty Company. The ring has the dangerous ability to hypnotize people. The user does this by slowly moving their hand back and forth, while the victim has to make direct eye contact with the middle of the ring.

Once under hypnosis, the target does what the user tells him or her to do. The only known way to snap a person out of their hypnotized state caused by a ring is for the victim's head or face to be in contact with water. However, this causes the victim to slip through trance and reality, triggered by the sound of fingers snapping.

One of these rings was ordered by George Beard after his principal, Benjamin Krupp blackmailed him and his friend Harold Hutchins. They used the ring to hypnotize Mr. Krupp, eventually accidentally turning him into Captain Underpants.

After Mr. Krupp finally gets evidence of George and Harold's pranks, he blackmails the boys into following a list of absurd rules exclusive to them. After a full day of performing various tasks such as washing Mr. Krupp's car, tending his garden, cleaning and redecorating his house, being model students in class and doing extra homework, cleaning his office, cleaning his clothes, as well as tending to his personal grooming i.e. keeping his finger nails immaculate; Harold comes up with a solution: when they're adults, they'll move to a far-off location to escape Mr. Krupp's slavery.

Thinking this too extreme, George remembers an old magazine ad for a 3-D Hypno Ring in his pocket and shows Harold. The ad states the ring would allow them to "amaze [their] friends, control [their] enemies, and take over the world". Agreeing this to be a good solution, the boys order a ring, which would take four to six weeks to be delivered to them.

A few weeks later, the ring arrives in a package in the Beard family's mailbox. While they are marveling at the ring, George warns Harold to not look directly at the ring. The boys don't bother to arrive at Benjamin Krupp's house and are late to school, saying they were trying to "figure out the secret to [their] new ring". George and Harold trick Krupp into staring into the ring. Harold instructs Mr. Krupp to look deeply into the ring as George moved it around. George tells Mr. Krupp that he is getting sleepy, causing him to fall into a trance. George tells Krupp that he's under his spell and must obey all of his and Harold's commands. George snaps his fingers, causing Krupp to repeat that he will obey.

Now hypnotized, Mr. Krupp is made to give George the tape which holds the evidence of George and Harold's recent prank. Harold replaces it with one of his sister's videos of Boomer the Purple Dragon Sing-A-Long. After finding some old issues of their comic series Captain Underpants, the boys forget about Mr. Krupp as they spend hours reading their old comics. When they realize it is nearing lunchtime, they opt to continue using the Hypno-Ring on Mr. Krupp to make him do embarrassing things.

George points the ring at Mr. Krupp once again, hypnotizing him even further. George tells Krupp to think he's a chicken, which he obeys and begins clucking. Harold tells Krupp to think he's a monkey, causing him to begin mindlessly shrieking and swinging from the lights. Mr. Krupp continued staring into the center of the Hypno-Ring, causing him to become extremely suggestible. Harold comes up with the idea to turn the mesmerized Krupp into Captain Underpants, to which George agrees. George issues the command to their deeply hypnotized principal and snaps his fingers. Mr. Krupp obeys, removing almost all his clothes except his underwear, as well as tying a nearby window curtain around his neck to resemble a cape. After laughing at Krupp's new appearance, the latter jumps out the window, still believing he is Captain Underpants.

After returning from their adventure, the boys attempt to hypnotize Mr. Krupp back to normality. After multiple failed attempts, Harold asks to see the instruction manual, to which George admits he possibly lost it. George pours water over Krupp's head, stating he saw it done "in a cartoon once". This worked and George soon finds the instruction booklet in his shirt pocket soon after, but throws it away, not knowing that it read not to pour water on a victim's head, which would cause the victim to slip between their hypnotized state and reality at the sound of finger snapping.

The Li'l Wiseguy Novelty Company has been shut down due to their distribution of the 3-D Hypno Rings. Chaos had resulted from people using the rings and for unknown reasons, a women hypnotized by the ring will suffer a mental blunder and do the opposite of what she is hypnotized to do. This problem would later on affect Ms. Ribble too.

After George and Harold cause the disaster of Mr. Krupp and Ms. Ribble's "wedding", a furious Ms. Ribble changes all of their grades to F's and "G's", which will cause them to flunk the 4th grade. Desperate, George pulls out the Hypno-Ring again. Harold is immediately against using it because they created Captain Underpants, but George assures him that they'll only use it to get their grades back to normal and nothing else. The next day, George and Harold use it on Ms. Ribble. They are very careful with hypnotizing her, telling her she won't do anything crazy, like turn into Wedgie Woman or try to take over the world, but simply return their grades back to normal. They are unaware of the mental blunder with women. As a result, Ms. Ribble does the opposite of what they said and becomes Wedgie Woman. After Wedgie Woman is defeated, George and Harold, now aware of the mental blunder, are able to return their grades back to normal and Wedgie Woman back into Ms. Ribble, but make her nicer and have her bake fresh chocolate chip cookies for them every day.

A 3-D Hypno-Ring is used by Evil George Beard and Evil Harold Hutchins to turn Sulu and Crackers into their evil minions. The Hypno-Ring only affects Sulu due to Crackers being female, unbeknownst to the boys. Good George Beard and Good Harold Hutchins later use their Hypno-Ring to return Sulu back to normal. At some point in time, Evil George and Evil Harold used their 3-D Hypno-Ring to turn their universe's Mr. Krupp into Captain Blunderpants.

3-D Hypno-Rings are small devices shaped like rings. The top part of the rings have the device which appears to send out waves, which is what allows the victim to be controlled by the user. However, it looks nothing more like a ring with the top part having a spiral line on its top. Do not look at it or you get hypnotized. 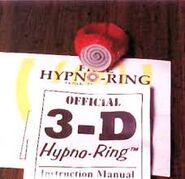