Benjamin Krupp is the principal of Jerome Horwitz Elementary School. He is the primary antagonist of the Captain Underpants franchise. He has a long history with two fourth grade students named George and Harold due to their constant pranks, wisecracks, and comic books. Benjamin's alter ego is Captain Underpants, which he is totally unaware of.

Benjamin is an unbelievably hot-tempered and nasty principal. He distributes detention slips to any student for even a minor infraction, just so long as they are unfortunate enough to cross his path. In one case, he punished George and Harold by not allowing them to have cafeteria food and makes them bring their own lunches in his office to keep an eye on them, even though he had no actual proof (however, given that the two were responsible it was justified). He once blackmailed George and Harold into doing all his daywork and even giving them extra homework in exchange for not getting "killed every day for the rest of their lives". He even tore out the last seven pages of the book, "How The Grinch Stole Christmas", and make the plot sound more realistic, assumingly cutting the book off right before the Grinch's heart grows.

His hatred towards George and Harold reaches the point where he tries to find a way to get rid of them (even if it meant that they would be killed) or (to a lesser extent) separate them somehow. In the ninth book, he was greatly happy that Tippy Tinkletrousers was going to destroy the duo and willingly told the Turbo Toilet 2000 where George and Harold hang out in the eleventh book, so they would be gone. Also when George and Harold flunked their "Super Secret" tests, Benjamin and the faculty were greatly overjoyed that Harold flunked the fourth grade because he and George would no longer be in the same grade and thus have completely different paths.

Despite being really nasty, Benjamin does show forms of kindness. He will readily punish anyone who is bullying his nephew Kipper Krupp. Kipper just needs to yell out for his uncle and explain to him what happened, though Kipper usually makes it look like he was bullied in front of his uncle (For example: after Kipper punched a little girl in the stomach, Kipper told his uncle that the girl's stomach hit his first). Benjamin always believes his nephew's claims no matter how illogical they seem.

Benjamin also cares about his job, as he feared he would lose his job in the second book after seeing the school destroyed by the Talking Toilets until George and Harold managed to fix the school. Additionally, when Tippy Tinkletrousers unintentionally changed the past, he unintentionally caused Benjamin to be fired from his post as principal. Mr. Krupp was shown shedding a tear as he was walking away with his "Krupp Stuff." With that happening also meant that in a few more years, he himself would never get hypnotized by George and Harold and become Captain Underpants, and the villains from the first three books would take over the world, end up in a rough battle which eventually resulted in the world’s destruction.

Depiction in the Film

Krupp is portrayed in the same way as his book self. However, in the movie, he was given some sympathetic qualities where he had very little in the original books. He has a crush on Edith the Lunch Lady (who, as well, has a crush on him). 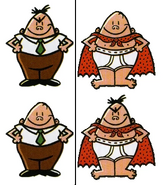 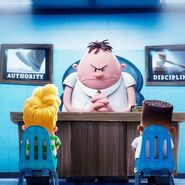 Mr. Krupp about to be pranked by George and Harold

Mr. Krupp getting angry as George is about to snap his fingers 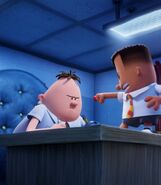 A furious Benjamin charging after George and Harold

Benjamin about to be fired from his job 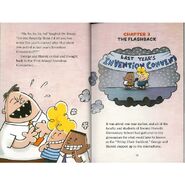 Benjamin admires and hires the new lunch ladies, who are evil aliens in disguise

Benjamin in the backyard looking for George and Harold. Benjamin angry at George and Harold 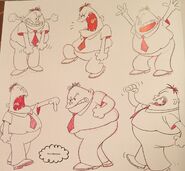 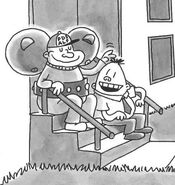 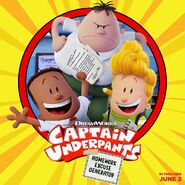 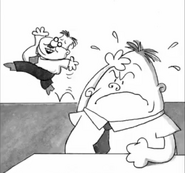 Benjamin's plan to deal with George and Harold

Mr. Krupp with the paperwork to separate George and Harold 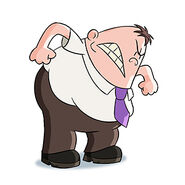 Official still from The Epic Tales of Captain Underpants 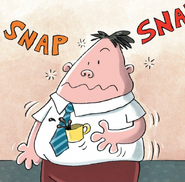 Krupp is hypnotized by the sound of a snap

Mr. Krupp while hypnotized into thinking he's a chicken 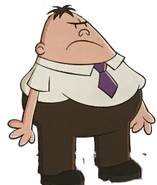