Captain Underpants and the Invasion of the Incredibly Naughty Cafeteria Ladies from Outer Space (and the Subsequent Assault of the Equally Evil Lunchroom Zombie Nerds) is the third book of the Captain Underpants series by Dav Pilkey. It is notable for its long title, with 25 words. It was mentioned in the fifth book as "the book with the annoyingly long title".

One dark, clear night in Piqua, Ohio, a flaming object was seen streaking across the quiet midnight sky. It shone brightly for a few seconds and then fizzled out just above Jerome Horwitz Elementary School without anyone giving it a second thought. The next day, everything seemed pretty normal, as none of the students or staff paid any attention to the roof or asked about the spaceship on top. Inside of the spaceship were three of the evilest, hideous, and merciless spacemen every to set foot on the roof of a small Midwestern elementary school, named Zorx, Klax, and Jennifer. Their mission is to take over planet Earth, which they discuss by infiltrating the school and turning the children and teachers into large, super-powered evil zombie nerds. Jennifer tells her two teammates to wait until it is narratively convenient for their plan to work, and in the meantime, they will watch their every move on their trinocloscope.

Meanwhile, in science class early the same morning, George and Harold are imitating dog and cat noises with Mr. Fyde thinking there are actual animals in the room making the noises. The children assure him that they didn't hear anything, and George advises him to leave and go see a doctor. However, Mr. Fyde wants to start the day's big "volcano experiment", and all of the students groan. George and Harold then learn about the effects of mixing baking soda and vinegar together (the two ingredients don't mix and make a slimy sticky liquid before exploding). When Mr. Fyde continues to hear cat and dog noises, he leaves to go see a doctor. George and Harold decide to play a prank on the cafeteria ladies by giving them a recipe that involves mixing baking soda and vinegar. The recipe is disguised as a cupcake recipe, with instructions to make a set of cupcakes for Mr. Krupp's birthday.

The next day, George and Harold tape the recipe/birthday card onto the entrance of the kitchen. When the lunch ladies find the two pieces of paper, they decide to surprise Mr. Krupp and make cupcakes for the entire school. Instead of mixing a small amount of baking soda and vinegar, they mix a large amount into the mix. This causes the school to get covered in the slimy green mixture. George and Harold are shocked that the prank didn't go as they expected. The lunch ladies get mad at Mr. Krupp and quit (because he can't punish George and Harold because there's no proof they did anything wrong). He said that it was not his birthday. Mr. Krupp wonders where he is going to find three new lunch ladies by tomorrow morning.

Zorx, Klax, and Jennifer, badly disguised as humans, come in and take the open lunch lady job. Mr. Krupp is happy that the problem is out of the way now. He then calls George and Harold via the intercom and tells them to come to his office. They do so and Mr. Krupp punishes the duo by forbidding them from having any cafeteria food even though he clearly knows he has no proof they were responsible for the disaster that happened the day before. He states George and Harold from now have to pack their own lunches and eat in his office so he could keep an eye on them.

When the boys prove to Mr. Krupp that the lunch ladies are aliens and that everyone has been turned into Zombie Nerds, however, Mr. Krupp laughs at them assuming they were lying. So he calls Edith Anthrope into his office and she comes as a Zombie Nerd and takes a huge bite of Mr. Krupp's walnut made desk. As he sees this happen he is in shock. George and Harold then take Mr. Krupp into the lunchroom but an alien disguised as a lunch lady sneaks behind and grabs Harold as he runs off accidentally pulling off the Alien's gloves. One of the aliens snaps his tentacle (a physical impossibility as noted by Harold) at them, George tries to get a cup of water to pour onto Mr. Krupp's head but it was too late. So Mr. Krupp becomes Captain Underpants due to the snap of the tentacle and dashes off running and right after that, the aliens block off the exit. George and Harold however defeat the aliens with a rolling pin and frying pan respectively. Captain Underpants returns, but he is too late as the aliens are already incapacitated. George and Harold ask where was he when they needed him. Captain Underpants reveals that he was at the shoe store ordering a cheeseburger. While they are arguing, the aliens order the zombie nerds to destroy Captain Underpants and his two friends. The trio get surrounded quickly, Captain Underpants demands the two boys to retreat to the Underwear Cave but they tell them there isn't anything like that around, so they escape by going on the school roof and into the alien spaceship.

Inside they find some Anti-Evil Zombie Nerd Juice, some Ultra Nasty Self-Destruct Juice, and some Extra Strength Super-Power Juice. The aliens however then suddenly come in and lock them in a cell, but luckily George and Harold hid the juice cartons they found behind their backs. Zorx starts the ship up so that the ship is hovering a few feet above the school. Klax then takes some Super Evil Rapid Growth Juice from the fridge so that the aliens can put the juice in the spray gun which will shower the juice over the zombie nerds. While laughing victoriously at their apparent victory, George and Harold swap the labels of the juice cartons and the signs of the spray gun and fuel tank, so the aliens pour self destruct juice into the fuel tank instead of rapid growth juice into the spray gun, which makes the spaceship explode.

After the dandelion is defeated, George wonders how to get the zombie nerds back to normal. Harold suggests using the anti-evil zombie nerd juice to fix the problem. George notes that he was hoping for something more dramatic, but as they are running out of pages they should do it. Mixing anti-evil zombie nerd juice with root beer and having all the zombies drink it, they turn everyone back to normal, but not before getting the Captain to dress back up like Mr. Krupp and pouring water on his head.

Something has changed about Mr. Krupp though because he drank the super-power juice, so now whenever he becomes Captain Underpants, he can fly and use other superpowers, thus making it harder for George and Harold to keep tabs on him (evident after a girl snaps her fingers in front of Mr. Krupp while she was listening to music). Instead of Harold and George looking out the window witnessing Captain Underpants running into the city. They are outside on his cape clinging on as he flies into the city instead. 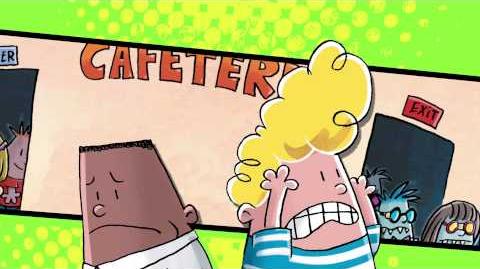 Captain Underpants and the Invasion of the Incredibly Naughty Cafeteria Ladies from Outer Space
Community content is available under CC-BY-SA unless otherwise noted.