Millions of years ago

She was mistaken for a Pterodactyl by the boys (and was initially believed to be male before she laid eggs in the tenth book) and was thought dead after sacrificing herself to prevent Tippy Tinkletrousers from destroying the galaxy. The series ends with George and Harold using the Robo-Squid suit in an attempt to save her and Sulu from their untimely deaths.

She has a Quetzalcoatlus voice in the Sound-O-Rama Audiobooks.

Captain Underpants and the Big, Bad Battle of the Bionic Booger Boy - Part 2: The Revenge of the Ridiculous Robo-Boogers

After the Combine-O-Tron 2000 and the Forgetchamacallit 2000 are stolen by Ms. Singerbrains, George and Harold travel back to the Cretaceous period. Using a box of saltines, they manage to lure in a Quetzalcoatlus, whom they bring back with them to the present in order to retrieve the stolen devices. While Harold takes to the Pterosaur (giving her the name "Crackers"), George insists that they are only borrowing her and that she needs to return to her own time. While Harold is reluctant to do so, he seemingly agrees.

However, it is revealed later that Harold instead brought Crackers to the treehouse, much to George's annoyance. While George points out that they can't keep her as a pet, he eventually agrees to let Crackers stay in the present for one night. Unfortunately, forgetting Melvin's warning not to use the Purple Potty two days in a row, the boys use it the next day, accidentally traveling to an alternate universe when the machine malfunctions.

When George and Harold arrive in the alternate universe, Crackers and Sulu are kidnapped by their alternate selves after the two are tricked into believing that they are with their main universe owners. Evil George and Evil Harold attempt to hypnotize Crackers and Sulu, which fails on the former but not the latter (since Crackers is female). Crackers helps the boys save the world from a brainwashed Sulu and their evil counterparts, after which she accompanies them until they are ambushed by Tippy Tinkletrousers.

Captain Underpants and the Terrifying Return of Tippy Tinkletrousers

It is unknown what became of Crackers in the original timeline where George and Harold are arrested. However, in the bad timeline accidentally created by Tippy Tinkletrousers due to his misuse of time travel, it is unlikely she was ever adopted at all.

Captain Underpants and the Revolting Revenge of the Radioactive Robo-Boxers

After Tippy Tinkletrousers uses further time-travel to prevent the bad future from ever existing, he decides to return to the moment when George and Harold were arrested and create an entirely new timeline in which he is able to defeat Captain Underpants. George, Harold, Crackers, and Sulu are able to escape to the past using the Purple Potty, but Crackers seemingly becomes very ill (George and Harold were attempting to return her to her proper time, as they were initially planning to do in Book 7). It is later revealed that she was not ill, but pregnant. Near the end of the book, she and Sulu sacrifice themselves to prevent Tippy from destroying the world.

While Crackers is not physically present in this book, it is revealed here that her eggs were the result of mating with Sulu (whom Harold speculates had his genes mutated when he was transformed into a bionic hamster). The resulting creatures are nicknamed "Hamsterdactyls" by George and Harold (as they were still unaware that Crackers was a Quetzalcoatlus and not a Pterodactyl). Crackers and Sulu's offspring are named "Tony", "Orlando", and "Dawn" by the boys. They are instrumental in the defeat of the Turbo Toilet 2000 after his return.

Captain Underpants and the Sensational Saga of Sir Stinks-A-Lot

Tony, Orlando, and Dawn once again help save the day at the climax of the book when Captain Underpants is defeated for good. Although Crackers herself does not appear in this book, George and Harold decide to keep the duplicate Robo-Squid Suit to try and save her and Sulu from their fates. 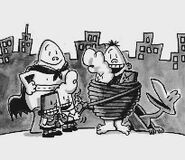 Add a photo to this gallery
Retrieved from "https://captainunderpants.fandom.com/wiki/Crackers?oldid=21859"
Community content is available under CC-BY-SA unless otherwise noted.