Diddlysaurus is a dinosaur with a real cool personality who loves to pull pranks. He makes his first appearance in The Dastardly Deed of the Devious Diddlysaurus as a dinosaur frozen in ice that Melvin excavated from Piqua Glacier for a school project.

He is voiced by Kevin Michael Richardson.

His personality & character traits are derived from a comic book George & Harold had accidentally left in the past, which the dinosaurs had based their whole life around and praised it as a book of knowledge. They left it when trying to retrieve a dinosaur from the past to make a better project than Melvin in order to put them higher up on the leader board of students.

The comic was about a scientist who wanted to write a book about dinosaurs, so he went back in time, but to his surprise, the dinosaurs spoke & acted like normal people with their own personalities. One of the dinosaurs he encountered was The Diddlysaurus, who eventually distracted him a stole his time machine to pull pranks in different time eras, until he was stopped by Captain Underpants who froze him with a slushie machine.

When George & Harold's attempt at getting a dinosaur from the stone age had failed, they were quick to assume that the frozen dinosaur in Melvin's project would be a threat once it thawed out of the ice, so in an attempt to keep it frozen, they take it to their treehouse and put it in front of an air conditioner. Unfortunately, they only have one outlet, and in order to watch TV they had to unplug the air conditioner, causing the ice block to melt after a few hours of promising themselves they'd watch 'just one more episode' of "Screaming Things".

Once the block of ice thaws, George & Harold were surprised to find out the dinosaur who they thought to be dangerous was actually cool & hip, and strikingly similar to the Diddlysaurus in their comic, same name and all. They then decide to put him in a disguise - a hat - and take him to school to pull some legendary pranks. However, after a while they get frustrated with him once he planned to put a few of what he called "Diddly Dino-rrhea Drops" into the cafeteria food to give everyone diarrhea after he's locked the bathroom doors, and decide to leave him on his own.

George & Harold then head to Piqua Glacier to excavate another dinosaur, assuming that all dinosaurs were cool like Diddly. Before their arrival, Melvin had already been there planning to thaw out a dinosaur himself using an invention of his named The Thaw & Order 2000. Although frightening at first, when the head dinosaur of the three, Malison, hears George mention Diddly, she claims to be a friend of his and helps them find him. Once they find him, Mallison reveals she was only his friend until he put her pizza place out of business by putting the Dino-rrhea Drops in the food as a prank, and only wanted to find him again to "kick his dino butt". 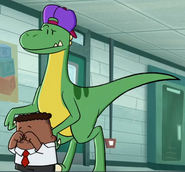 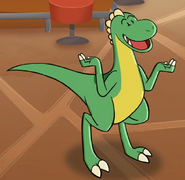 Add a photo to this gallery
Retrieved from "https://captainunderpants.fandom.com/wiki/Diddlysaurus?oldid=20550"
Community content is available under CC-BY-SA unless otherwise noted.