This article is about the school secretary. For the page regarding Benjamin Krupp's crush, see Edith.

Neutral (usually)
Bad (when transformed into a villain)

Edith Anthrope is the school secretary at Jerome Horwitz Elementary School. Her name refers to "misanthrope", while her full name is a pun on "eat it and throw up". She is voiced by Grey Griffin in the Captain Underpants: The First Epic Movie and Patty Mattson in The Epic Tales of Captain Underpants.

Ms. Anthrope, like pretty much all of the school was turned into a zombie nerd due to the food that the evil alien lunch ladies served everyone, when George and Harold are trying to prove to Mr. Krupp that their are aliens invading the school and they have turned everyone into zombie nerds they use Ms. Anthrope as an example but although she looked like a zombie nerd Mr. Krupp wasn't persuaded that easily but when she takes a bite out of Mr. Krupp's desk, it is then when he starts to believe them.

When Ms. Ribble sent George and Harold to Mr. Krupp's office, Ms. Anthrope told them that Mr. Krupp was on the phone. She then made the boys copy off the Friday Memo while she went to lunch. George and Harold, however, re-did the memo to fit their own silly ideas, and passed the Memos out, making the following week very strange. She appears at Ms. Ribble's Retirement Party, where, after Mr. Krupp hands over Harold's card that makes Ms. Ribble think Mr. Krupp has proposed to her, she tells them that she will arrange everything, and although she wasn't seen at the wedding, she most likely showed up due to her enthusiasm and most likely was splashed with food in Ms. Ribble's fit of rage.

Captain Underpants and the Big Bad Battle of the Bionic Booger Boy - Part 1: The Night of the Nasty Nostril Nuggets

After Melvin Sneedly (the Booger Boy) goes on a rampage, Ms. Anthrope is captured by him. Captain Underpants rescues her, but she becomes a plot device by kissing Captain Underpants with a lot of slobber. This works the same as pouring water on his head, so Captain Underpants goes back to being Mr. Krupp, and is eaten up by the booger boy.

Captain Underpants and the Big, Bad Battle of the Bionic Booger Boy - Part 2: The Revenge of the Ridiculous Robo-Boogers

When Mr. Krupp was in Melvin's body, he demanded a cup of coffee from Ms. Anthrope, and assuming it was Melvin Sneedly talking to her she refused and was furious at him. She is later seen among the many people of whom Mr. Krupp annoyed while in Melvin's body chasing the real Melvin.

Ms. Anthrope is first seen congratulating Mr. Krupp for punishing George and Harold for not coming to school on test day, Ms. Anthrope is also the first of the teachers to be convinced that she is dreaming and therefore she can do whatever she wants, so she strips off down to her bra and underwear and started causing mayhem, soon Mr. Meaner, Miss Labler, and Ms. Ribble all joined in also convinced that they are dreaming, and it didn't stop until every teacher in the school was going mad, soon the police arrive and arrest all the teachers (Ms. Anthrope included) and take them to jail.

She first shows up entering her office when George and Harold tried infiltrating it to steal Melvin's turtle. To distract her, George calls her while using a voice mimicking a game show host's and asks her to please hold if she would like to win $1 billion. Anthrope gullibly buys it and being so excited about it, stays on hold and remains frozen for the rest of the movie.

In a mid-credits scene, George and Harold find that she's been on hold for the whole movie. George decides to call her again, and Anthrope gets so surprised that she accidentally drops her phone perfectly into the position of hanging it up. Realizing she "lost" her chance to win $1 billion, she screams and throws a fit of rage. Unsurprisingly, George and Harold don't feel sorry for her at all, they just make her the theme of their next comic book, "Attack of Stuck on Hold Woman".

Miss Anthrope makes several appearances in the series. In "The Problematic Pandemonium of the Punishing Plungerina," she is transformed into a monster named Clogneta when she falls into a bath tub with Toilet Paper, Avocados, Cat Food, Cats, and Scented Bath Products in it. Most of the other times, she just asks “Did you call me?” whenever Mr. Krupp makes a grumbling noise inside the school. Mr. Krupp usually replies, “No!” and she yells “FINE!” angrily.

Miss Anthrope's skin tone is different in both the books and the show. In the books, she is white, but in the animated incarnations, her skin is brown.

In the fourth book, she wears a crop top on a school field trip. Her usual way of hiding her belly button is by covering it with clothing, which has little effect, since her belly button sticks out so much that it is very visible even underneath the clothing. She is probably so hateful toward George and Harold for the sole purpose that, in every comic book they made with her in it, they purposely drew a bulging outie belly button to further humiliate her.

Like most of the staff at Jerome Horwitz Elementary, Miss Anthrope is cruel and could care less about the well-being of children. She is usually apathetic to everything and hates it when Krupp bosses her around. 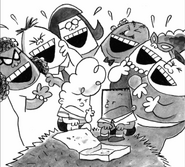 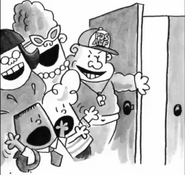 "Did you call me?"
Community content is available under CC-BY-SA unless otherwise noted.
Advertisement