Stanley Peet is a student of Jerome Horwitz Elementary School. He along with everyone else in his family sweats excessively. He is a member of the M.I.S.F.A.R.T.S.

He has slick black hair and sweat covered clothes.

Stanley is somewhat laidback and wants to be helpful. He seems to have embraced his sweaty nature and is perfectly fine using it to help his friends. He is usually nice. In the first episode of Captain Underpants in space it is revealed he would like to not be covered in sweat all the time.

In Captain Underpants and the Confounding Concoction of the Crooked Combotato, Stanley serves as the main inspiration for the game as George and Harold realize they can use his potatoes coming out from his armpit to make a fun game. He plays an integral role as the time it takes Bo to eat one of his potatoes is how long each person gets for their story. He steams each of the photos before Bo eats them.

He gets the third story. He is nervous before going but eventually seems to figure things out. In his story captain underpants and the Combotato fall from paradise into the wild west. Combotato decides to become evil again and rob the Pony Express (a train filled with horses). So George the kid, Harold the kid, and Stanley the kid get Captain Underpants to stop him. At first Captain Underpants struggles to ride his horse, but the kids remind him he can fly. He flies to fight Combotato atop the Pony Express and uses tap dancing to break the roof in. His story ends here.

Stanley can create sweat slicks on command. He can also grow plants in his armpits very quickly using his sweat. He can even somehow use his sweat to steam these crops. 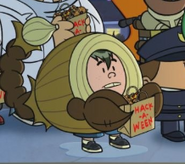 Add a photo to this gallery
Retrieved from "https://captainunderpants.fandom.com/wiki/Stanley_Peet?oldid=21986"
Community content is available under CC-BY-SA unless otherwise noted.