Ms. Ribble only appears as a background character and has only one line of dialogue. Her sole speaking role is: "Their teacher kept pinching herself. 'I just know this is a dream,' she said." At the end of the book, Ms. Ribble appears snapping her fingers at George and Harold's pranks while Mr. Krupp is walking by her class, inadvertently transforming him into Captain Underpants. She is never addressed as Ms. Ribble in this book, instead being referred to as simply Teacher.

Tara Ribble is among those of the teachers who bully George and Harold after they are suspended, she later watches Mr. Meaner get eaten by a talking toilet, shortly before being eaten herself. Then once the talking toilets are defeated and everything is restored she along with the other teachers are convinced in was all a dream. She is later seen in the detention room writing sentences with the other teachers who where mean to George and Harold after they where made Principals for the day.

She and almost the whole school get turned into Evil Zombie Nerds by Zorx, Klax, and Jennifer. They are then rescued by George, Harold, and Captain Underpants.

Ms. Ribble is the primary antagonist in the fifth book, at the start of the book she decides to retire and she forces the class to create her retirement cards, but George and Harold make her a comic book instead which she finds offensive and sends them to detention where they create a fake card for Ms. Ribble. George uses a reverse psychology trick on Mr. Krupp, who takes it from them to deliver to her on his own, but what was written on the card was a message asking her was asking her to marry him, which Mr. Krupp has previously signed after being tricked by George. To their dismay, Ms. Anthrope and the other teachers think it's serious and decide to throw a wedding ceremony in the school’s auditorium during the upcoming weekend. During the wedding, Ms. Ribble rejects Mr. Krupp, stating that she didn’t want to marry him because his nose looked ridiculous. After Me. Krupp clams down, he tells Ms. Ribble that George and Harold were the ones who had pulled the prank on them. Ms. Ribble goes on a rampage and throws food everywhere, yelling that she wanted to kill George and Harold. After the disaster at the wedding, George and Harold use the 3D Hypno-ring, which they had previously used to turn Mr. Krupp into Captain Underpants on her telling her to stop everything and forget it ever happened, but they didn't count on the fact that the Hypno-ring is only meant for males and females will do the exact opposite of what you say. This caused Ms. Ribble to think she was Wedgie Woman, prior to Harold messing around while they were hypnotising her. That night she attacks George and Harold in their treehouse, where she accidentally slams into a shelf, toppling over a carton of Extra Strength Super Power Juice, making its content spill out onto her head and get soaked into her hair and brain. Her powers, however, were not the same as Captain Underpants’ as she has not directly drank the juice. However, thus her to actually become the Wicked Wedgie Woman, as the juice had given her hair superpowers which allowed them to turn into several arms which she uses to kidnap George and Harold and take them back to her house. While there, she uses her new brain power which she received from the juice to create robotic versions of them to replace them. Later the Wicked Wedgie Woman, Robo-George and The Harold 2000 attack the city. She starts to repeatedly attack and target Captain Underpants, eventually rendering him immobile, while George tricks Wedgie Woman by getting her to spray her hair with hair remover. They then take her back to the school and her using the Hypno-ring by saying the exact opposite of what they wanted, which resulted in Ms. Ribble became the nicest teacher in the school.

Captain Underpants and the Big, Bad Battle of the Bionic Booger Boy - Part 1: The Night of the Nasty Nostril Nuggets

Ms. Ribble is now a loving teacher. George and Harold demonstrate how to make "Squishies" where you put ketchup packs under a toilet seat and when someone sits on them, they squirt on their legs. Ms. Ribble pulled one on Mr. Krupp. Melvin Sneedly changed himself to the Bionic Booger Boy by accident and was really disrupting Ms. Ribble's classes unintentionally. When Melvin sneezed, Ms. Ribble persuaded him to cover his mouth because he had made such a big booger mess in the room. However, he sneezed again and covered his mouth. It made a much bigger mess in the room and Ms. Ribble was covered with boogers from head to toe. She told Melvin not to cover his nose next time and asked the class who wanted a cookie. Although she is not seen in the rest of the book nor in any of the books after this one, it was mentioned that she got sick with a cold, possibly because of Melvin sneezing on her.

Captain Underpants and the Terrifying Return of Tippy Tinkletrousers

Ms. Ribble makes a small appearance in the Ninth Book on page 256. She is seen sitting down with Mr. Krupp in a teachers' conference with Mr. Fyde when Kipper and his friends come running down the hall.

Ms. Ribble makes a small appearance in the eleventh book she is first heard when Ms. Anthrope talks to her over a megaphone to send George and Harold to her office. She is again seen when George and Harold convince all the teachers in the school that they are dreaming and they can do whatever they want so her along with nearly all the other teachers strips down to her bra and underwear and start doing crazy things due to the fact that they think they are in a dream. As a result the police arrive and arrest all the teachers and take them to jail.

For some STRANGE reason, she was shown to have reverted back to her original personality despite the fact that the effects of the Hypno-Ring are suppose to be permanent for females, though it is likely that the cold she got from Melvin had something to do with it.

Ms. Ribble has a minor role in the film, mostly serving as a background character. 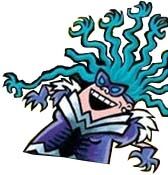 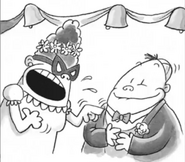 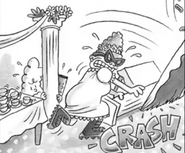 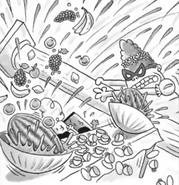 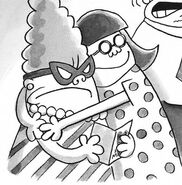