The story begins with the kinky school troublemakers, George Beard and Harold Hutchins, two boys who are known by almost every one of their teachers as disruptive and rude. George and Harold love to play pranks on the helpless kids and teachers at Jerome Horwitz Elementary School. They are also known schoolwide for the comic book series that they create and sell on the playground, known as "The Adventures of Captain Underpants", their favorite super hero. They have many enemies (all of them being the faculty teachers). But the one who despises them most is the school principal, Mr. Krupp. Mr. Krupp hates them, their pranks, and especially the Captain Underpants comics. He vows to get them one day ("one day very very soon" he claims).

One day, the school's football team, the Jerome Horwitz Knuckleheads, is having their biggest game of the year against the Stubinville Stinkbugs. Before the game even starts, the football players, cheerleaders, and band players already experience countless problems with their equipment. Apparently, someone sabotaged the whole game. After many more pranks, the game had to be called off. As the players walk away, we see George and Harold crouching beneath the bleachers, laughing. Of course, they were the ones who did it all. They believe they won't get in trouble for it since they assume there is no proof the teachers can claim to prove they did it.

After taking in the homework, George states he has an idea that can could get them out of this situation. George reveals that he had bought a 3-D Hypno-Ring which they could use to make Mr. Krupp hand them the video and forget that this whole mess ever happened. After 4-6 weeks of back-breaking labor, George and Harold finally get the ring via the mail. After purposely making themselves late for chores and school, Mr. Krupp gets them into his office and demands where were they this morning. George and Harold state they were going to show the new ring they got. George then uses the 3-D Hypno Ring to hypnotize Mr. Krupp into handing over the incriminating video. Harold replaces it with one of his little sister Heidi's Boomer the Purple Dragon sing along videos. As they look in the cabinet on what Mr. Krupp had confiscated from the boys and other people over the yrs, they discover some good stuff including the Captain Underpants comics they wrote from the previous yrs. They began to reminisce the comic books by reading. Hours later, they realized it was getting close to lunch time as they were preparing to leave that noticed Mr Krupp still in a trance, so they decided to wait and play around. They then begin fooling around with the ring hypnotizing Mr Krupp thinking he is a chicken then later a monkey. And then lastly, they get an idea after looking at the comic and George hypnotizes Mr. Krupp to act as if he were the Amazing Captain Underpants. Mr Krupp began removing his toupee and clothing and takes of the curtain tying it to his neck and he is seen dressed like Captain Underpants yelling the battle cry "Tra La Laaa!". George and Harold look at him and began laughing hard to their distress. As they stopped laughing to take one more look at him, they saw he was gone. They then heard him outside doing the battle cry again and as they look out the window they saw Mr Krupp dressed as Captain Underpants running outside into the city of Piqua. Mr. Krupp, as Captain Underpants, takes the role seriously and departs to fight crime. George and Harold were shocked knowing that they didn't give a command to Mr. Krupp to fight crime. So they took their skateboards and a few items out the cabinet to help save the principal.

Suddenly, the crystal shop next door explodes, as two robots walk out of it, carrying a very large crystal. Captain Underpants tries to stop them, but his cape gets caught on their van. George and Harold grab onto Captain Underpants's feet, as he is dragged to an old, abandoned warehouse. A boy and his mother are at the bench waiting for the bus as the boy sees them passing by but the boy's mother didn't believe him.

George uses a slingshot to toss fake doggy doo-doo between Dr. Diaper's feet. Dr. Diaper is terribly embarrassed, thinking that he has had an "accident". When he departs to change his diaper, George and Harold incapacitate the robots and untie Captain Underpants. They pull the self-destruct lever on the Laser-Matic 2000 thinking that will turn it off.

Dr. Diaper, enraged at the destruction of the Laser-Matic 2000, his robots, and the foiling of his plan to take over the world, aims his Diaper-Matic 2000 ray gun at George, Harold, and Captain Underpants.

George, Harold, and Captain Underpants return to Mr. Krupp's office. They give Captain Underpants Mr. Krupp's clothes along with an extra pair of underpants to dress up like Mr. Krupp, so that nobody in the school would recognize him. Captain Underpants them gives them the meanest look to them like the boys asked him to do to look like Mr. Krupp. The boys try to figure out how to return Mr. Krupp to his normal self, but they've lost the instruction manual for the 3-D Hypno-Ring. They try several times to hypnotize Captain Underpants back into Mr. Krupp, but the methods do not work. As a last resort, George tries dumping water on Mr. Krupp's head. It works, and Mr. Krupp returns to his angry self, resolving to give the video to the football team after all though George and Harold are surprisingly very happy to see Mr. Krupp again. George finds the instruction manual to the 3-D Hypno-Ring in his shirt pocket, but he and Harold throw it away as they believe they do not need it anymore. As it turns out, the team enjoyed the Sing-A-Long video so much that they change their name from the Knuckleheads to the Purple Dragon Sing-A-Long Friends.

George and Harold go back to their goofy ways with nothing that is threatening to their lives. Unfortunately from this point on, whenever anyone snaps their fingers, Mr. Krupp transforms into Captain Underpants. Ms. Ribble is then shown snapping her fingers after George and Harold disrupt the class with their jokes, Mr. Krupp who was passing by with a cup of coffee unfortunately hears the sound of fingers snapping and drops his cup of coffee being in a trance, becomes Captain Underpants again and runs out of the school to fight crime. Harold and George hear his battle cry and both look outside to see that Captain Underpants has return once again. Much to their surprise, both respond to this with "Oh No!" and "Here we go again!" respectively as they thought it was over with Captain Underpants, it wasn't. The adventure was only just beginning.

And another thing, after Mr. Krupp is "watered," the ring instructions are found in George's shirt pocket. After being thrown away, you can read on the back of the instruction manual, "WARNING!" "Whatever you do, don't pour water on anybody's head when they are in a trance! This will cause the hypnotized person to slip back and forth from trance to reality whenever they hear they hear the sound of fingers snapping." Despite this, the boys were able to de-hypnotize their teacher "Ms Ribble" through the ring with no problems although considering how they were panicking they may not have thought of trying to use the method used in the fifth book. 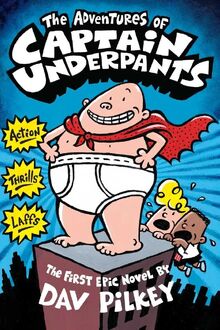 Retrieved from "https://captainunderpants.fandom.com/wiki/The_Adventures_of_Captain_Underpants?oldid=14290"
Community content is available under CC-BY-SA unless otherwise noted.