The Costly Conundrum of the Calamitous Claylossus

The Costly Conundrum of the Calamitous Claylossus is the seventh episode of The Epic Tales of Captain Underpants.

Mr. Krupp enlists the help of Melvin Sneedly to help scare the kids by making the rumorous student Bo Hweemuth his shark for keeping them straight with the promise of getting Melvin into his dream school. After hearing the rumors, George and Harold decided to get to the bottom of this, and as it turns out, he's just a nice guy who's a big fan of Captain Underpants and a great sculptor. After the truth is revealed, everyone is happy. That is, everyone except Krupp, that is, and he's not planning on losing his shark, and a plan of Melvin's ends up turning Bo into the giant Claylossus, and the entire world a clay diorama!

The episode begins with George and Harold at recess, discussing their ideas for Captain Underpants toys, when a swarm of panicked kids rush past them and they feel the sound of the ground shaking. Melvin warns them to run, hide and scream and that Bo Hweemuth is on a rampage. Gooch and Dressy run past them, and eventually, they flee the scene as well. After everyone runs away, Mr. Krupp congratulates Melvin on how he much scared them with the rumours about Bo and the shaking caused by the Faker Quaker 2000, and to keep it up so he'll give him the recommendation to Eliteanati Academy.

Later, during P.E, George and Harold discuss on they're idea to put Bo in a comic book, so people will see him in a more comedic, less serious light. Just then, Gooch comes up to them, and tells them a rumour he heard about Bo being found by bigfoots as a baby, only to swallow them all when they ran out of food due to his immense appetite. Now hiding in the abandoned ceramics studio, his lair, where whoever enters won't live to tell the tale. Dressy chimes in, saying that she heard that Bo was released when the second moon exploded, where he got to Earth by a chariot of rainbow fire drawn by a golden griffin, and that he now steals the souls of children with lightning to fuel his immortality. Mr. Meaner throws in that he heard Bo has laser teeth, but only monsters have those and they aren't real, except for the previous monsters at the school and chupacabra. He then tells them about his encounter with chupacabra in Mazatlan; hairy, vicious, big fangs, and surfing.

George and Harold make a comic about Bo and release it to the kids at the playground, confident that it'll cease they're fear of him. However, Melvin comes up to them, saying that Bo read the comic and is furious, and the other kids hear the shaking of the Faker Quaker 2000 and run away. George and Harold start running as well, until George points out that they can't trust Melvin and never even spoke to Bo. The two enter the art room, where they see Bo violently pounding on a mass of clay, and instantly regret their decision. He then turns to them, asking if they're responsible for the Claylossus comic, in which they immediately run out of the room with Bo pursuing them. After a chase montage, they hid in the bathroom, where Bo kicks down all the stall doors except for the one the boys are hiding behind. After he leaves, they switch around the letters of a sign so it instead reads "Do butts think?", and laugh until Bo out of nowhere shows up, glaring at them.

Bo tells the two that he has something for them, causing them to grow more afraid. But then he takes it out and reveals it's actually a Captain Underpants action figure. Bo tells them that he made it since he's such a huge fan of their comics and offers them to see his other sculptures. Upon seeing them, the duo realize that Bo’s not at all like what the rumours made him out be. Bo also says he plays banjo, only to repeat it three times after they don't respond the first time. George exclaims that they've gotta tell everyone about Bo not being the scary beast Krupp always painted him to be, in which Bo responds sadly that the others kids don't like him. But the two reassure him that they'll love him.

After a while, the other kids are convinced that Bo isn't at all like what the rumours say. Gooch asks if his venom will melt his skull, which Bo denies, only to say he can turn into a Saber-toothed truck, much to the others' shock. Bo immediately says he was kidding. Mr. Meaner asks if he's (or has been) friends with chupacabra, in which Bo responds with "Ask him, he's right behind you.", much to his horror. The other kids laugh, all while Mr. Krupp was staring at them from his office window, aware of the debunking on the rumours about Bo. He blames Melvin for this, saying that an aquarium (The School) needs a shark (Bo Hweemuth) to scare the other fish (the other kids) into line, and that his aquarium just lost it's shark. Mr. Krupp insists that Melvin finds a way to make Bo a monster again. Ms. Anthrope appears inside the room, asking Krupp if he called her, and informing him that his shark is gone. He panics and frantically shouts "Close the beach!".

Bo walks into the ceramics room, only to find what looks like a potters wheel inside and immediately associates it to be a present from George and Harold. Melvin however, appears, saying that he is Bo's only friend, asking him if he really thinks the comic George and Harold made about him is hilarious. Bo says yes and Melvin tells him that they’re simply using him to make toys and that real friends wouldn’t portray each other as monsters. Bo denies this, saying that they know he’s isn’t a monster, only for Melvin to activate the Interclaytionstation 2000 and fuse Bo with clay, turning him into Claylossus, an enormous, moronic clay monster.

Outside, Harold asks Dressy if she's seen Bo, which she responds that she hadn't, but tells them that she has a gift for him since he saved a ladybug from a spider's web. Gooch chimes in that Bo helped him fix a bike that wasn't even his. But just then, Melvin intervenes, saying that Bo's coming. The others are unfazed, only for Bo (now Claylossus) to smash down one of the walls of the school. The kids run away, horrified while Melvin simply looks on smugly. He tells the monster that the others will always fear him, much to the latter's dismay. Claylossus is enraged, slamming Melvin against tetherball pole before storming off. While on the run, George reminds Harold that Bo's still their friend, and that they've gotta help him.

Claylossus smashes his way into the Clayground building, causing him to level up. Melvin and Mr. Krupp follow him in the former's Tinytug 2000. Mr. Krupp says that turning Bo into an actual monster wasn't what he meant, but Melvin insists that he just needs to smoosh him into a ball and try again. The arms of the Interclaytionstation 2000 knock Mr. Krupp off and George and Harold turn him into Captain Underpants. Harold tells him they need to help Bo, but Captain Underpants, mistaking Bo for a dog, calls his name out repeatedly. George explains to him that Bo's currently a clay monster, but that he can't hurt him since he's their friend.

Meanwhile, Claylossus continues on his rampage until Melvin grabs him the arms of Interclaytionstation 2000 in an attempt to smoosh him, in spite of George and Harold protests. Infuriated, the monster rips of the machine's arms and explodes, causing the entire town to turn to clay. George and Harold comment that it's "nuts and awesome", but the narrator adds that it's expensive. When Claylossus forms from the pieces of him splattered around town. He begins stuffing random objects into his body, causing him to grow bigger and stronger. Harold asks Melvin how they can change him back, which he explains but refuses to help the two. Claylossus then grabs and shoves Melvin into his body. The two tell Captain Underpants to fight Claylossus but to be both tough and gentle. He flies towards the monster and they fight in Cheap-o-rama.

The boys and Captain Underpants begin to get blobby due to the reducing money for animation budget. Harold asks Captain Underpants to retrieve Melvin, and he launches himself into the monster's body, and after a while of pulling out random objects and popping in random parts of Claylossus's body, finally does. George and Harold are able to convince Melvin to turn the Interclaytionstation 2000 into a DeInterClaytionStation 2000 to change everyone back. They roll everyone up into a ball and crash into the gizmo, turning everyone back to normal. Bo remarks that George and Harold saved him and the three share a group hug. They reassure him that they're friends and aren't intentionally just using him to make toys, which Bo takes positively. A fire hydrant then splashes water all over Captain Underpants, causing him to turn back into Krupp.

It's then shown that Bo's become George and Harold's the CTO (cheap toy officer) and now fixes up merchandise for Treehouse Comix Inc. Gooch asked how long it'll be til the toys are done, and Bo answers a month. Suddenly, Mr. Meaner bolts in, shouting that chupacabra's found him, and Mr. Krupp screams that he's found his shark, and the latter wasn't happy. And Gooch shouts that bigfoot's come as well. George and Harold are ecstatic at the idea of a battle between Chupacabra, shark, and bigfoot, but the narrator tells them they can't afford it, much to their disappointment. However, he agrees to show them a sneak-peak.

Add a photo to this gallery 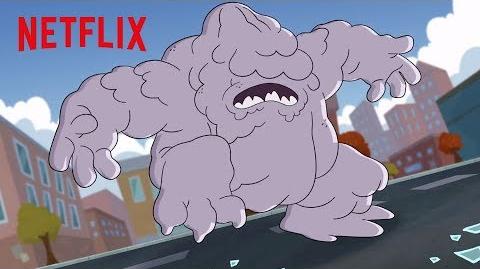 Everything Turns Into Clay! Dreamworks The Epic Tales Of Captain Underpants Netflix
Add a photo to this gallery
Retrieved from "https://captainunderpants.fandom.com/wiki/The_Costly_Conundrum_of_the_Calamitous_Claylossus?oldid=21899"
Community content is available under CC-BY-SA unless otherwise noted.