The Sickening Fumes of Smartsy Fartsy

The Sickening Fumes of Smartsy Fartsy is the twelfth episode of The Epic Tales of Captain Underpants.

Pulling too many pranks has got George and Harold one step closer to being expelled, so they use Melvin's new machine (which was made so Melvin could steal George and Harold's idea of living gas) to bring George's fart to life so it could get into Mr. Krupp's safe and steal his rule book. With the book, they can bring it to Vil Endenemys and get him fired. However, upon reading their new comic book, Smartsy Fartsy (George's fart) becomes offended and rebels against George and Harold so he can give all of gaskind some respect.

George and Harold got their prank roll one step closer to being expelled. They realized that if they talk to the School's Superintendent, AKA, Doctor Vil Endenemys and telling that Krupp wrote rules by hand in the rulebook, they could fire him before Krupp could expel them. But Krupp put the book in a safe. Safes are easy to crack, right? Well, not as easy as this one. Only living gas clouds can get through them. So they use one of George's farts to create a living gas cloud named Smartsy Fartsy. Smartsy tries to get some respect, but he failed. They couldn't breath because of Smartsy's Fartosphere. They used a helicopter to blow Smartsy Fartsy away. Everything was back to normal. But they still haven't got the book to Dr. Vil Endenemys. They left Melvin in a cupcake shop since he got banned from the smart school he dreams of going to. Then a mysterious dude in a creepy robe comes up to Melvin.

Add a photo to this gallery 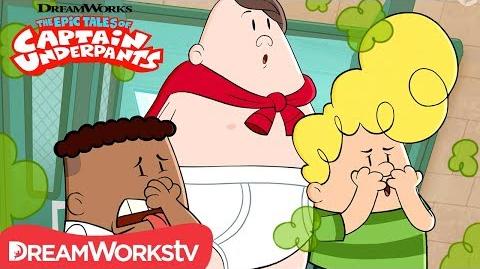 Gas-O-Rama Battle Against Smartsy Fartsy DREAMWORKS THE EPIC TALES OF CAPTAIN UNDERPANTS
Add a photo to this gallery
Retrieved from "https://captainunderpants.fandom.com/wiki/The_Sickening_Fumes_of_Smartsy_Fartsy?oldid=21898"
Community content is available under CC-BY-SA unless otherwise noted.